More than 800 students participated in one of four commencement ceremonies 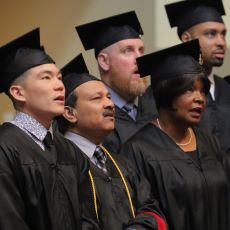 Moody Bible Institute concluded its 133th academic year with three commencement ceremonies in May—one in Michigan (May 11) and two in Chicago (May 18). A fourth ceremony will take place in Spokane, Washington, on June 22.

View a recording of the Moody Bible Institute commencement ceremony.

“It was a deeply moving experience to participate in my first commencement season as president of Moody,” said Dr. Mark Jobe, who began his tenure as president during the Spring semester. “My prayer for each graduate is that as they join the tens of thousands of Moody alumni serving around the world they will take their ministry-focused training in the area of their life’s calling and be an agent for Gospel-focused transformation in a world that needs hope of Jesus Christ.”

Moody commencement began at Moody Theological Seminary in Plymouth, Michigan. Dr. Jobe (MBI ’84, MTS ’98), who is also an alum of both the undergraduate school and seminary, addressed the graduates, who had worked toward such degrees as the MA in Biblical Studies, MA in Counseling Psychology, MA in Spiritual Formation and Discipleship, Master of Theological Studies, and Master of Divinity.

View a recording of the Moody Theological Seminary commencement ceremony.

In Chicago on the following Saturday, Dr. Ed Stetzer, Billy Graham chair and executive director of the Billy Graham Center for Evangelism at Wheaton College, gave the commencement address to graduates of Moody Bible Institute and Moody Theological Seminary. He is also host of Moody Radio’s nationally-syndicated program, Ed Stetzer Live. The undergraduate school ceremony was held in The Moody Church, while commencement for seminary was held in Torrey-Gray Auditorium. The degrees pursued range from Biblical Studies and Communications to Pre-Counseling and TESOL.

An honorary doctorate was awarded to Gregory R. Thornton ’81, Moody’s senior vice president of Media. “Recognizing Greg for his life’s work in this way was an honor,” said Randy Fairfax, chair of Moody’s Board of Trustees. “His prayerful commitment to advancing the Word of God through his role with Moody’s media ministries, as well as service in the local church and other para-church ministries around the world in such a Christ-like manner is an example for others to follow.” He added, “I also can’t express enough Moody’s gratitude for his serving as interim president. He is a humble, gracious man and I pray that the Lord gives him many more years to bear fruit for the Kingdom.”

Several retiring faculty were recognized with words of appreciation and a standing ovation.

“I am incredibly grateful to the Lord for these professors who have served well and helped make Moody Bible Institute the world’s most influential Bible college,” said Dr. John Jelinek, Moody’s interim provost and vice president of Moody Theological Seminary. “Under their teaching and leadership, countless students have grown in their relationship with the Lord and learned how to biblically meet the demands of the day in order to make an impact for Christ. Everyone in the Moody family thanks them for their commitment to the students, Jesus Christ, and the Word of God.”

Moody Aviation will hold a commissioning ceremony for 15 students in Missionary Aviation Technology—nine who majored in Flight and six in Maintenance. Dr. Mark Jobe will give the address in the advanced training hanger on Felts Field in Spokane on June 22.